A little about me... 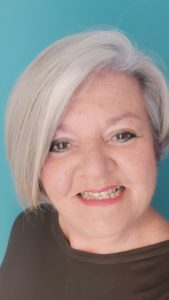 Michaela has been involved in music and performing for too many years to mention.

She started her performance career in Gospel music, singing in and around the Birmingham area.

She spent 3 years performing in Tenerife before coming back to the UK to marry her “holiday romance”.

Once back in the UK she obtained her Post Grad Diploma in Musical Theatre.

Having a deep love for Theatre has seen her take on many roles from Anna in the King and I, to Mama Rose in Gypsy. She also had a short time on stage in the West End in the Show “125th Street ” at the Shaftesbury Theatre.Radio

As well as performing in Cabaret and Bands she has sung for TV and Radio, including Radio Jingles.

Since starting as cover vocal coach for Razzamataz in Yate some years ago she has remained with Razz sharing her passion for singing and performing with the students in Yate and Keynsham.

She said ” After taking on the role of Vice Principal when Keynsham first started with 12 children and now 4 years later with nearly 80 it was impossible to wave goodbye to the school, the children and parents who feel like a second family to me. I’m so excited to be stepping into the shoes of Principal and looking forward to growing the school and lots of projects to engage with our Students and the local community “

Did you know that we're award winning?